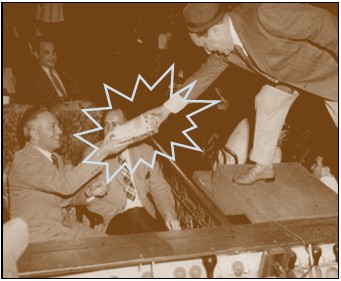 One of the worst famines in Ethiopia's history devastated the country in the 1980's, resulting in an estimated 300,000 to 1.2 million deaths and the relocation of some 2.5 million people. Generally, the famine is attributed to drought and civil unrest in the early 1980's. However, lesser-known causes, such as the enforced collectivization of farms and relocation of entire populations of some areas by the communist government greatly exacerbated the death toll.

In 1974 Mengistu Haile Mariam, Chairman of the Ethiopian Armed Forces Coordinating Committee (the Dergue), became the Vice-Chairman of the ruling Provisional Military Administrative Council (PMAC). Later that year, in November, Mengistu ordered the assassination of the PMAC's moderate Chairman and urged his loyalists to kill some 60 Ethiopian aristocrats and government officials, as well as suspected enemies within the ranks of the PMAC and the Dergue. In doing so, Mengistu became the de facto strongman of the regime, and helped orchestrate the nationalization of Ethiopia's industries and farmlands. By 1977 a battle between Mengistu's supporters and rivals on the PMAC resulted in the death of the PMAC Chairman and others, allowing Mengistu to become both the Chairman of the PMAC and the Ethiopian Head of State. In 1984 he established the communist Workers' Party of Ethiopia and further aligned Ethiopia with the USSR.

Armed rebellion against Mengistu and the government, especially in the northern regions of Tigray and Eritrea (now an independent country) led to increasingly harsh and violent treatment of the civilian population by the Ethiopian military as Mengistu increasingly used the ongoing famine to subdue opposition to his communist programs and goals. He removed people from their lands, relocating them and forcing them into refugee camps, where food, or the lack thereof, was used to force submission and compliance.

Meanwhile, as the world at large was becoming more aware of the tragedy unfolding in Ethiopia, various countries, along with international aid organizations and charitable groups, began efforts to provide relief to famine-stricken Ethiopia. Millions of dollars were raised. Tons of food and grain was shipped. And the people of Ethiopia continued to starve.

Well, having had a unique opportunity to observe the situation from my vantage point in England where I was stationed at the time with the U.S. Air Force, let me share a few insights. One, much of the money raised was given to the communist government of Ethiopia where it lined the pockets of Mengistu and his cronies and helped support the military and enable its repressive actions against the citizens of Ethiopia. Two, much of the grain that was sent to Ethiopia was not allowed to be unloaded at the docks, while that which was unloaded was subjected to excessive docking and unloading fees. Third, much of the grain that was unloaded was left sitting in warehouses where it either spoiled or was sent to feed the military. And fourth, the small amount that eventually did make it to the people mostly went to those who were willing to prostrate themselves before Mengistu and his communist Workers' Party for a piece of bread.

Sadly, many of those raising money to feed Ethiopia knew where the money and food was going. They knew that it was propping up the communist regime and that very little was actually getting to the starving masses. Nevertheless, they continued their fund-raising efforts, exploiting the famine as much for their own purposes as Mengistu and the Workers' Party of Ethiopia did for theirs. Consequently, to this day I still cringe when I hear "Do They Know It's Christmas?" or "We Are the World."

"Ethiopia has suffered not so much a natural catastrophe as a deliberate state-sponsored atrocity, with nature providing the authorities with the means to break the rural society's resistance to radical change. Thus the parallels which can be applied to Ethiopia are less with Africa than with previous instances of totalitarian agrarian extremism: the Khmer Rouge in Cambodia; China during the Great Leap Forward; the Ukrainian famine of the early 1930's."

In other words, Mengistu was following the example of Pol Pot, Mao, and Stalin of using famine to repress his enemies and control the people. However, the communists were not the first to use food to control the masses. This is a technique that has been used by despots, dictators, and strongmen for thousands of years. But they did not invent it, it is found in the Bible.

Let's look at an interesting account of an extremely severe famine recorded in the Book of Genesis. Chapter 41 tells us how God enabled Joseph to interpret Pharaoh's dreams as a warning that there would soon be seven years of plenty followed by seven years of famine. Upon hearing Joseph's interpretation and advice, Pharaoh appointed Joseph as ruler of all Egypt, second only to Pharaoh, and committed all preparation for the coming famine into his hands.

As the famine took hold and people began to feel its effects, we see that they were soon willing to spend whatever they had to in order to feed themselves and their families. The Bible tells us in Genesis 47:13-14:

As the famine continues and the money fails, we read in verses 15-17:

"And when money failed in the land of Egypt, and in the land of Canaan, all the Egyptians came unto Joseph, and said, Give us bread: for why should we die in thy presence? for the money faileth. And Joseph said, Give your cattle; and I will give you for your cattle, if money fail. And they brought their cattle unto Joseph: and Joseph gave them bread in exchange for horses, and for the flocks, and for the cattle of the herds, and for the asses: and he fed them with bread for all their cattle for that year."

Still later in the famine, bereft of money and cattle, we find them willing, in versus 18-20 to sell both themselves and their lands for bread:

"When that year was ended, they came unto him the second year, and said unto him, We will not hide it from my lord, how that our money is spent; my lord also hath our herds of cattle; there is not ought left in the sight of my lord, but our bodies, and our lands: Wherefore shall we die before thine eyes, both we and our land? buy us and our land for bread, and we and our land will be servants unto Pharaoh: and give us seed, that we may live, and not die, that the land be not desolate. And Joseph bought all the land of Egypt for Pharaoh; for the Egyptians sold every man his field, because the famine prevailed over them: so the land became Pharaoh's."

"And as for the people, he removed them to cities from one end of the borders of Egypt even to the other end thereof."

And, in a fashion uncomfortably similar to the globalist World Economic Forum founder Klaus Schwab's comment regarding the Great Reset, "You will own nothing and be happy," we read in verse 25:

"And they said, Thou hast saved our lives: let us find grace in the sight of my lord, and we will be Pharaoh's servants."

We see this pattern repeated down through history. The use of a crisis such as a famine or simply food shortages and societal unrest to progressively deprive the populace of their money, means of production, property, and, ultimately, themselves. Add in resettlement to break up communities and family connections and you have the makings of a totalitarian state and a dictator. All for a piece of bread.

Of course, some would object and say that Joseph was not a despot. He was a godly man who had the needs and wellbeing of the Egyptian people in mind. However, it must be pointed out that, while he was a benevolent ruler, he was an absolute ruler, second only to Pharaoh. He was, in effect, a dictator, albeit a benevolent one. Unfortunately, not all dictators are as benevolent and godly as Joseph was. In fact, history has shown us that most are quite the opposite.

The Bible warns us in 2 Timothy 3:1, "that in the last days perilous times shall come." Jesus also warns in Luke 21 that there will be "wars and commotions" (verse 9), "great earthquakes … famines, and pestilences" (verse 11), and "Men's hearts failing them for fear, and for looking after those things which are coming on the earth" (verse 26). During that time, Satan will supply a man, known in Scripture as the Beast or the Antichrist, promising great things, with a small price of course.

Notice what John records in Revelation 13:5:

This person is the coming king that Daniel writes about in Daniel 11:36, saying:

"And the king shall do according to his will; and he shall exalt himself, and magnify himself above every god, and shall speak marvellous things against the God of gods, and shall prosper till the indignation be accomplished: for that that is determined shall be done."

And all you will need to do is receive, according to Revelation 13:16-17, a little mark in your right hand, or forehead, without which you will not be able to buy or sell. Oh yeah, and there is just one other thing, 2 Thessalonians 2:5 says that he will claim to be God and in Revelation 13:15 we read that his cheerleader, known as the False Prophet, will "cause that as many as would not worship the image of the beast [king/Antichrist] should be killed."

But is that too great a price to pay for a piece of bread? Not for some, but remember, God tells us in Revelation 14:9-11 what the ultimate price for that piece of bread will be:

"And the third angel followed them, saying with a loud voice, If any man worship the beast and his image, and receive his mark in his forehead, or in his hand, The same shall drink of the wine of the wrath of God, which is poured out without mixture into the cup of his indignation; and he shall be tormented with fire and brimstone in the presence of the holy angels, and in the presence of the Lamb: And the smoke of their torment ascendeth up for ever and ever: and they have no rest day nor night, who worship the beast and his image, and whosoever receiveth the mark of his name."

Something to remember the next time someone comes around during a crisis promising a piece of bread.