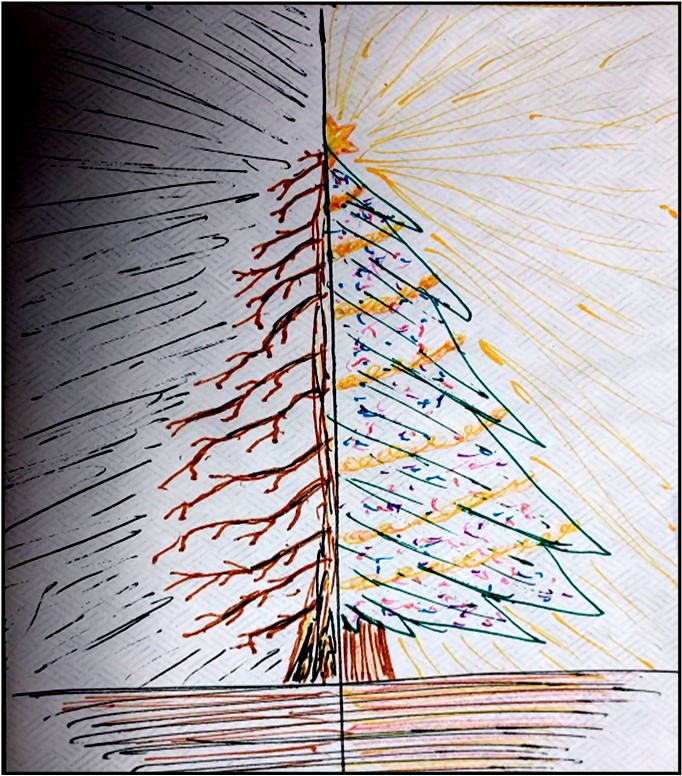 The origin of the Christmas tree is somewhat obscure. Explanations range from being part of pagan winter solstice celebrations to early Christian celebrations of life over death. Christmas trees are condemned by some and celebrated by others.

Consequently, nearly every year someone asks if Jeremiah 10:1-4 condemns the Christmas tree:

"Learn not the way of the heathen, and be not dismayed at the signs of heaven; for the heathen are dismayed at them. For the customs of the people are vain: for one cutteth a tree out of the forest, the work of the hands of the workman, with the axe. They deck it with silver and with gold; they fasten it with nails and with hammers, that it move not."

Sounds pretty much like a condemnation of the Christmas tree, does it not? But is it?

Let's take a closer look at this passage. It begins with God speaking to the Jewish people, warning them about becoming like the heathen around them. However, in the previous chapter, in Jeremiah 9:13-14, God rebukes them for turning away from Him and following the ways of the heathen:

"…Because they have forsaken my law which I set before them, and have not obeyed my voice, neither walked therein; But have walked after the imagination of their own heart, and after Baalim, which their fathers taught them:"

And, in verses 25-26, God goes on to say that they had essentially become just like the heathen:

"Behold, the days come, saith the LORD, that I will punish all them which are circumcised with the uncircumcised; Egypt, and Judah, and Edom, and the children of Ammon, and Moab, and all that are in the utmost corners, that dwell in the wilderness: for all these nations are uncircumcised, and all the house of Israel are uncircumcised in the heart."

Consequently, when we get to chapter 10, we need to realize that many of the Jews had already turned from God and His Word and embraced idolatry. So, in the beginning of chapter 10, we find God reminding His people that they should be listening to Him and not the heathen. Unfortunately, the people had already learned the way of the heathen and adopted vain customs; in particular, idolatry.

"For the customs of the people are vain: for one cutteth a tree out of the forest, the work of the hands of the workman, with the axe. They deck it with silver and with gold; they fasten it with nails and with hammers, that it move not."

It quickly becomes apparent that what is being discussed here has to do with idolatry because Jeremiah refers to the tree that is cut out of the forest as "the stock" later in verse 8. In fact, Jeremiah used this same word earlier in 2:26-27, saying:

"As the thief is ashamed when he is found, so is the house of Israel ashamed; they, their kings, their princes, and their priests, and their prophets, Saying to a stock, Thou art my father; and to a stone, Thou hast brought me forth: for they have turned their back unto me, and not their face: but in the time of their trouble they will say, Arise, and save us."

In chapter 2 it is clear that the stock Jeremiah is referring to is an idol. Likewise, the context of chapter 10 also indicates that the tree cut out of the forest is an idol as well. Notice verses 5, 8-9, and 14-15:

So how does the tree cut from the forest become an idol? Well, the prophet Isaiah gives us more insight. In Isaiah 44:13-17 we read:

"The carpenter stretcheth out his rule; he marketh it out with a line; he fitteth it with planes, and he marketh it out with the compass, and maketh it after the figure of a man, according to the beauty of a man; that it may remain in the house. He heweth him down cedars, and taketh the cypress and the oak, which he strengtheneth for himself among the trees of the forest: he planteth an ash, and the rain doth nourish it. Then shall it be for a man to burn: for he will take thereof, and warm himself; yea, he kindleth it, and baketh bread; yea, he maketh a god, and worshippeth it; he maketh it a graven image, and falleth down thereto. He burneth part thereof in the fire; with part thereof he eateth flesh; he roasteth roast, and is satisfied: yea, he warmeth himself, and saith, Aha, I am warm, I have seen the fire: And the residue thereof he maketh a god, even his graven image: he falleth down unto it, and worshippeth it, and prayeth unto it, and saith, Deliver me; for thou art my god."

As we can see, the piece of wood that is formed into an idol is not the same as a Christmas tree. The residue of the tree cut from the forest is carved into the figure of a man, which means that the limbs and bark are removed as the stock of the tree is shaped and finished as a graven image of wood.

In Isaiah 40:19-20 we see two examples of graven images; one made from metal, the other from a block of wood:

"The workman melteth a graven image, and the goldsmith spreadeth it over with gold, and casteth silver chains. He that is so impoverished that he hath no oblation chooseth a tree that will not rot; he seeketh unto him a cunning workman to prepare a graven image, that shall not be moved."

"So the carpenter encouraged the goldsmith, and he that smootheth with the hammer him that smote the anvil, saying, It is ready for the sodering: and he fastened it with nails, that it should not be moved."

Covering the carved wooden idol with gold and silver plates is mentioned Jeremiah 10:9 as well:

"Silver spread into plates is brought from Tarshish, and gold from Uphaz, the work of the workman, and of the hands of the founder: blue and purple is their clothing: they are all the work of cunning men."

It should be noted, however, that merely making an image and plating it with gold or silver does not make it an idol. After all, according to 1 Kings 6:23-28, when King Solomon was constructing the Temple "he made two cherubims of olive tree, each ten cubits high. … And he overlaid the cherubims with gold." He also, according to verses 29, 32, and 35, "carved figures of cherubims and palm trees and open flowers" on the walls and doors and overlaid them with gold as well.

What makes a graven image, with or without gold plating, an idol is when it takes the place of God. It is when one "…falleth down unto it, and worshippeth it, and prayeth unto it, and saith, Deliver me; for thou art my god. (Isaiah 44:17)" This is when the second of God's Ten Commandments is broken:

Clearly, then, the Bible does not condemn Christmas trees in Jeremiah 10:1-4. What it condemns is idols. However, with that said, if the Christmas tree takes the place of God in the hearts and minds of those who have them, then they would be an idol and, therefore condemned as any idol would be. And those who indulge in such idolatry are no different than those in Habakkuk 2:18-19 where God says:

What profiteth the graven image that the maker thereof hath graven it; the molten image, and a teacher of lies, that the maker of his work trusteth therein, to make dumb idols? Woe unto him that saith to the wood, Awake; to the dumb stone, Arise, it shall teach! Behold, it is laid over with gold and silver, and there is no breath at all in the midst of it.

Now, while some may still eschew Christmas trees based on pagan origins or other reasons, please don't let it be because of Jeremiah 10:1-4. And remember, there are also many who embrace the Christmas tree as a symbol of life and triumph over death. So, this Christmas, whether you do or do not have a Christmas tree, let's keep the focus on the birth of our Lord and Saviour Jesus Christ and remember what Paul said in 1 Corinthians 10:31:

"Whether therefore ye eat, or drink, or whatsoever ye do, do all to the glory of God."