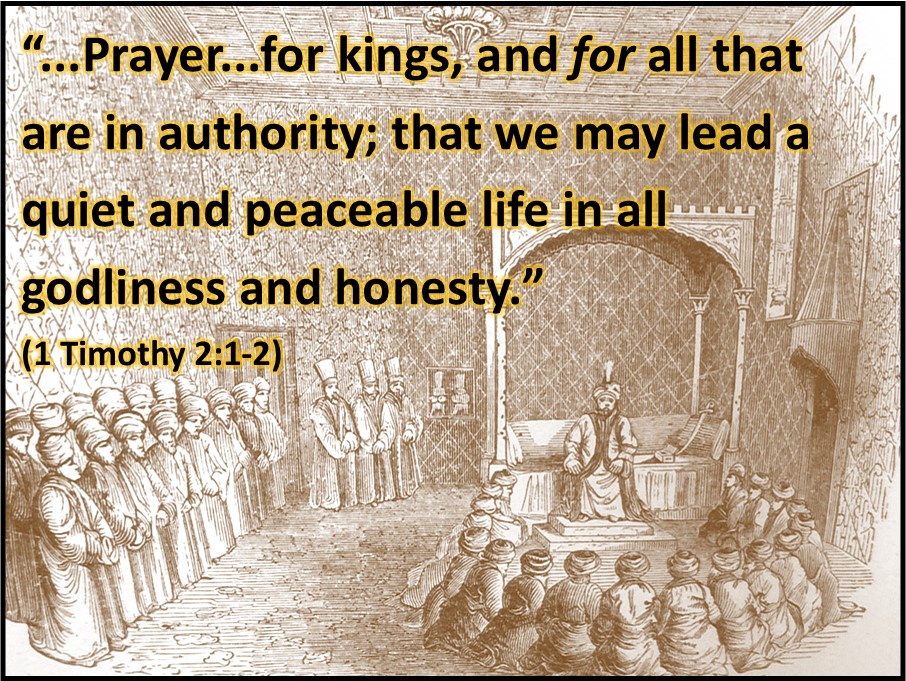 Recently, I was asked a question about praying for ungodly leaders. The question was posed as follows:

"I know we are supposed to pray for our leaders even though I did not vote for him I find myself wanting to pray against a lot of them in Washington that their terms be shortened…What's your thoughts as a preacher on that . I know God ordained governments but most governments are so far from doing God's will with all the garbage going on it's hard for me to support our so called leaders."

This is a good question because in 1 Timothy 2:1-2, Paul writes:

"I exhort therefore, that, first of all, supplications, prayers, intercessions, and giving of thanks, be made for all men; For kings, and for all that are in authority; that we may lead a quiet and peaceable life in all godliness and honesty."

This reason, "that we may lead a quiet and peaceable life in all godliness and honesty" is reflected in the second paragraph of the United States Declaration of Independence:

"We hold these truths to be self-evident, that all men are created equal, that they are endowed by their Creator with certain unalienable Rights, that among these are Life, Liberty, and the pursuit of Happiness."

And in the first paragraph of the United States Constitution:

"We the People of the United States, in Order to form a more perfect Union, establish Justice, insure domestic Tranquility, provide for the common defense, promote the general Welfare, and secure the Blessings of Liberty to ourselves and our Posterity, do ordain and establish this Constitution for the United States of America."

This reflects the responsibilities of government officials, from police officers and judges to legistators, governors, presidents, prime ministers, and kings, indicated by Romans 13:4:

However, the next two verses of 2 Timothy 2, verses 3-4, provide a further reason to pray for government officials:

"For this is good and acceptable in the sight of God our Saviour; Who will have all men to be saved, and to come unto the knowledge of the truth."

Godly leaders, therefore, are to protect and uphold peace and tranquility, along with life, liberty, the pursuit of happiness among their fellow citizens and countrymen. And, in doing so, they make it possible for Christians to freely share the Gospel of Jesus Christ. This is God's plan for human governments and government officials. As Christians, we are to pray that God's will be done and, so, that means praying for "For kings, and for all that are in authority".

Unfortunately, not all leaders or government officials fulfill God's mandate to be a "minister of God to thee for good" and "a revenger to execute wrath upon him that doeth evil." Instead, they become ministers of self/Satan/etc. to us for evil and revengers who execute wrath on them that do good. What then? Do we still blindly follow such leaders and pray for God to bless them and grant them success?

Unfortunately, there are many pastors who teach that we are to obey those in authority over us in all things. They cite passages such as:

However, this is an unfortunate misunderstanding or, in some cases, a gross misrepresentation of the Scriptures. Those who propagate blind allegiance to government officials fail, or worse yet ignore, what the Bible teaches us about the limits of obedience to human authorities in light of our greater responsibility to obey God's ultimate authority in all things.

For instance, in Acts chapters 4 and 5, Peter and John are apprehended by the Sanhedrim, a 71 member ruling council of the Jews made up of the chief priests, rulers, scribes, and elders. They are commanded by the Council, "not to speak at all nor teach in the name of Jesus" (Acts 4:18). Peter and John responded in Acts 4:19-20, "Whether it be right in the sight of God to hearken unto you more than unto God, judge ye. For we cannot but speak the things which we have seen and heard." Then, after they are further threatened by the Council in verse 21, they are set free, only to be found again later, in chapter 5, speaking and teaching in the name of Jesus. Brought before the Council, they are asked by the High priest in Acts 5:28, "Did not we straitly command you that ye should not teach in this name?" Rather than back down, the Apostles stood firm in their resolve to obey Christ in all things and responded in verse 29, "We ought to obey God rather than men."

Their answer, "We ought to obey God rather than men," is instrumental in understanding the limits of our obedience to human authority. Another indication of the limitations of human authority is found in Ephesians 6:1 where Paul writes:

"Children, obey your parents in the Lord: for this is right."

Obedience to human authority is commanded, but with a qualification: "in the Lord".

Now, this is not a contradiction with what Paul writes in Colossians 3:20:

"Children, obey your parents in all things: for this is well pleasing unto the Lord."

In Colossians Paul is emphasizing how obedience is "well pleasing unto the Lord." In Ephesians he gives us the limitation on that obedience by saying that children are to obey their parents "in the Lord: for this is right."

Other limitations on human authority can be seen in the example of the Hebrew midwives who were told by the King of Egypt, in Exodus 1:16, to kill any male Hebrew babies that they delivered. Nevertheless, according to Exodus 1:17:

"But the midwives feared God, and did not as the king of Egypt commanded them, but saved the men children alive."

God did not condemn the midwives for their civil disobedience. Instead,according to Exodus 1:20-21, He rewarded them:

"Therefore, God dealt well with the midwives: and the people multiplied, and waxed very mighty. And it came to pass, because the midwives feared God, that he made them houses."

In fact, Moses, one of Israel's greatest prophets, was himself a product of civil disobedience. His mother, Jochebed, violated Pharaoh's order to kill all male Hebrew babies and saved Moses by putting him in an ark of bulrushes. In Exodus chapter 2 we read how Pharaoh's daughter found the ark and then God orchestrated events so that Jochebed had the privilege of being hired to nurse Moses and take care of him.

These are but a few examples disobedience on the part of God's people toward ungodly laws and commandments. Other examples can be drawn from the ministries of both Jesus and Paul, as well as from many of the Old Testament prophets as you study the Bible. So, clearly, we are not called to blindly obey unjust and ungodly leaders.

I believe, then, that in so much as possible, we should do our best to obey those that have authority over us. However, when they come in conflict with God's Word, we are compelled to resist government officials and leaders who are acting and ruling contrary to God's Word and their God ordained responsibility to rule as ministers of God. We still pray for them, though, in hopes that God will get ahold of their hearts and bring them under conviction that they might get saved, if they are unsaved, or get their hearts right with God if they are saved. We also pray that, saved or unsaved, they will govern and lead in accordance with Godly principles.

But what if they don't? Well, we certainly don't need to pray for their success if they are acting contrary to God's Word. Instead, I think we can pray that God will prevent them from succeeding with their ungodly plans and hinder their ungodly deeds. We can pray as David did in Psalm 7:9:

"Oh let the wickedness of the wicked come to an end; but establish the just: for the righteous God trieth the hearts and reins."

And, if need be, we can pray further as David did in these other passages:

We can also pray in accordance with Jude 15 that the Lord would soon come "To execute judgment upon all, and to convince all that are ungodly among them of all their ungodly deeds which they have ungodly committed, and of all their hard speeches which ungodly sinners have spoken against him."

In the meanwhile, Paul's admonition in Romans 12:18, "If it be possible, as much as lieth in you, live peaceably with all men", is good advice, keeping in mind that we, according to Ephesians 6:12, "…wrestle not against flesh and blood, but against principalities, against powers, against the rulers of the darkness of this world, against spiritual wickedness in high places."

And, by all means, don't stop praying "for kings, and for all that are in authority", whether they are godly or not, "that we may lead a quiet and peaceable life in all godliness and honesty."