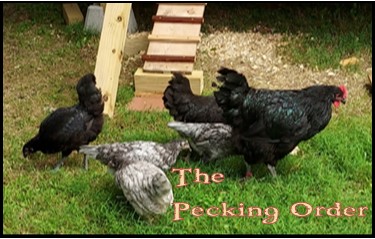 We recently established a new flock of chickens. Since the chickens came from various breeders they have had to sort out their own unique social structure as they were coming together as a new flock. This structure is referred to as the "pecking order."

"Pecking order," later known as "dominance hierarchy," was a term coined by Norwegian zoologist Thorleif Schjelderup-Ebbe to describe the hierarchy of flock dynamics in his 1921 doctrinal dissertation, Gallus domesticus in Its Daily Life. Schjelderup-Ebbe had spent much of his younger days closely watching and studying the interactions of chickens. Based on his observations, according to an online article in Discover, The Chicken-hearted Origins of the 'Pecking Order,' by Jack El-Hai on 5 July 2016 (https://www.discovermagazine.com/planet-earth/the-chicken-hearted-origins-of-the-pecking-order) he described how:

"Chickens…rank themselves in predictable ways. The rankings emerge from squabbles over food, and when a chicken finds itself defeated in a dispute, it will forever submit to the winner. Each member of the flock understands who ranks above and below it… Dominant chickens remind their subordinates of their relative social status with a painful peck. He believed that this acceptance of hierarchy is inherited, not learned. From this avian system of hierarchy, we get the term "pecking order," which Schjelderup-Ebbe coined."

Left to themselves, chickens, like people, can be somewhat greedy and self-centered. This structure, the pecking order, however, brings order to the flock while helping distribute resources and provide protection. It helps each individual bird to know where they fit in and what their role in the flock is. Kind of like the way our system of laws and societal norms do for us.

It is interesting that Schjelderup-Ebbe's observations on the social structure of chickens led him to believe that they are born with the desire for structure. Evolutionists spin creative stories about how the desire for structure evolved over millions of generations of selfish chickens that accidentally engaged in mutually beneficial cooperative behaviors which somehow became programed into their genetic code, eventually developing the complex behaviors of the pecking order and their instinctive acceptance of it.

Creationists, on the other hand, see the pecking order as a reflection of the Creator's design and a vindication of God's Word. After all, the Bible says in 1 Corinthians 14:33, "For God is not the author of confusion, but of peace..." So, it was God, not evolution, that gave chickens the desire for social structure and order.

Likewise, it appears that God has given human beings an instinctive desire for social structure and order as well. Left to themselves, groups of people will develop a social structure that will bring order to the group, helping to distribute resources and provide protection. Unfortunately, the process, like the development of the pecking order amongst chickens, may be violent and cruel. Examples can be seen in the development of inner-city gangs, junior high and high school student bodies, and prison populations. In each of these cases, a distinct pecking order relegates the positions and privileges enjoyed by the individual members of those groups based on their social rankings in the group. New people tend to upset the rankings and, like new chickens added to an established flock, often go though a difficult process as they find their place in the group's pecking order.

The reason the process of establishing a social pecking order, or dominance hierarchy as sociologist like to refer to it, in human societies can be difficult, even violent and cruel, is found in the Bible. So far as chickens go, it is because the world is under a curse. Romans 8:22 says, "For we know that the whole creation groaneth and travaileth in pain together until now." But, with people, we have the added dimension of a fallen, sin nature as a result of Adam's disobedience in Genesis chapter 2 when he ate from the tree of the knowledge of good and evil. Consequently, the Scriptures tell us in Romans 5:12:

"Wherefore, as by one man sin entered into the world, and death by sin; and so death passed upon all men, for that all have sinned…"

Fortunately, God did not leave us to ourselves and our fallen nature to develop our own pecking order. He gave a set of basic life instructions in the Bible. He also gave us several institutions to help carry out those instructions: the family, human governments, and the House of God.

The first of these institutions is the family. This was instituted in the first two chapters of the very first book of the Bible:

"So God created man in his own image, in the image of God created he him; male and female created he them. And God blessed them, and God said unto them, Be fruitful, and multiply, and replenish the earth, and subdue it: and have dominion over the fish of the sea, and over the fowl of the air, and over every living thing that moveth upon the earth." (Genesis 1:27-28)
"And the LORD God said, It is not good that the man should be alone; I will make him an help meet for him. … And the LORD God caused a deep sleep to fall upon Adam, and he slept: and he took one of his ribs, and closed up the flesh instead thereof; And the rib, which the LORD God had taken from man, made he a woman, and brought her unto the man. And Adam said, This is now bone of my bones, and flesh of my flesh: she shall be called Woman, because she was taken out of Man. Therefore shall a man leave his father and his mother, and shall cleave unto his wife: and they shall be one flesh." (Genesis 2:18,21-24)

The family is where we first learn to reign in our selfish sin nature, to consider the wants and needs people other than ourselves, and to respect authority.

The second institution is human government. It began as an outgrowth of the family with the patriarchs and then kings and monarchs. In fact, in Daniel 2:21, Daniel says of God, "…[H]e removeth kings, and setteth up kings…" Much the same can be said of judges, magistrates, governors, and other government officials as well, especially in light of passages such as Romans 13:3-6:

"For rulers are not a terror to good works, but to the evil. Wilt thou then not be afraid of the power? do that which is good, and thou shalt have praise of the same: For he is the minister of God to thee for good. But if thou do that which is evil, be afraid; for he beareth not the sword in vain: for he is the minister of God, a revenger to execute wrath upon him that doeth evil. Wherefore ye must needs be subject, not only for wrath, but also for conscience sake. For for this cause pay ye tribute also: for they are God's ministers, attending continually upon this very thing."

Human government, then, serves to rein in our sin nature in our dealings and interactions with people beyond our family in the larger community around us.

The third institution is the House of God. I say "House of God" because, while we first see families worshiping and offerings sacrifices at altars and other places where God led or instructed them to worship, we eventually see God giving instructions for a dedicated house of worship. In the Books of Exodus, Leviticus, Numbers, and Deuteronomy God gave Moses detailed instructions regarding the construction of a portable structure to serve as the House of God and for the institution of a special class of religious officials, the priests, to care for it and minister therein. King Solomon later built a permanent House of God, known as the Temple, which was destroyed by the Babylonians, rebuilt, and then finally destroyed by Rome. In the New Testament era, however, the Temple was succeeded by the local church as the House of God:

"But if I tarry long, that thou mayest know how thou oughtest to behave thyself in the house of God, which is the church of the living God, the pillar and ground of the truth." (1 Timothy 3:15)

And, in this new House of God, we find that God:

Consequently, the House of God serves to further reign in our sin nature by teaching us who God is and what He expects of us.

Together, these three institutions, the family, human government, and the House of God, when they follow God's Word, work together to help us overcome our sin nature and develop a social structure that will bring order to society and help distribute resources and provide protection. They also serve to remind us that we are sinners because we have a sin nature and that the only way to be victorious over the sin nature is through our Lord and Saviour Jesus Christ.