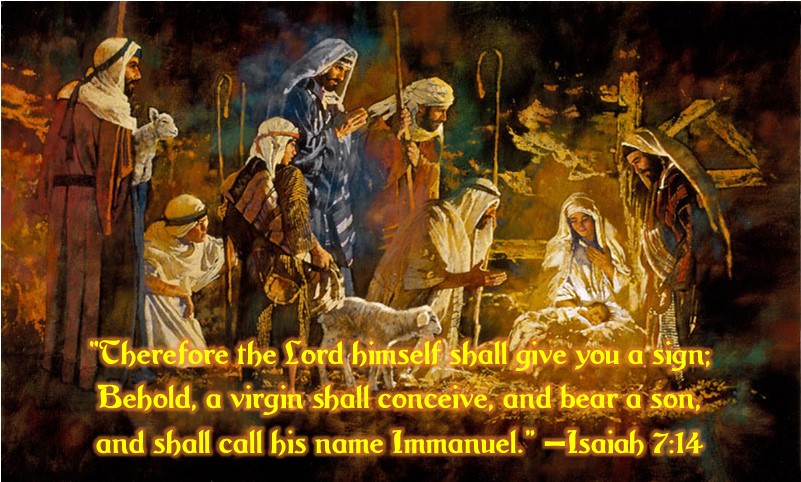 Why was the Virgin Birth of Jesus Christ Necessary?
Alfred B. Davis
Posted: November 30, 2021

One of the best-known prophecies about the coming Messiah is found in Isaiah 7:14, where the Prophet says, "Therefore the Lord himself shall give you a sign; Behold, a virgin shall conceive, and bear a son, and shall call his name Immanuel." This prophecy is shown to be fulfilled in the birth of Jesus Christ in Matthew 1:22-23 where he writes, "Now all this was done, that it might be fulfilled which was spoken of the Lord by the prophet, saying, Behold, a virgin shall be with child, and shall bring forth a son, and they shall call his name Emmanuel, which being interpreted is, God with us."

Now, the miracle of the virgin birth of Jesus Christ is a spectacular and momentous fulfillment of Bible prophecy. But, other than a supernatural occurrence to validate Bible prophecy and set apart the birth of our Saviour from all others, why is it so important? Or, to put it another way, why was the virgin birth so necessary?

To answer that question, we need to go back to Adam and Eve in the Garden of Eden. In Genesis 1:25-26 we see the creation of Adam and Eve:

They were created pure and holy in the image of God. As such, they were without a sin nature and had complete fellowship with God. They, and all of creation, were in perfect harmony with the Creator. "And God saw every thing that he had made, and, behold, it was very good" (Genesis 1:31a).

Unfortunately, this blissful paradise was soon turned upside down. According to Genesis 2:16-17, Adam and Eve were given the freedom to eat from every tree in the garden except for one:

And the LORD God commanded the man, saying, Of every tree of the garden thou mayest freely eat: But of the tree of the knowledge of good and evil, thou shalt not eat of it: for in the day that thou eatest thereof thou shalt surely die.

In the next chapter, however, we find Satan tempting Eve, in the guise of a serpent, to eat the forbidden fruit. She does and then offers the fruit to Adam who also partakes of it. Immediately, according to Genesis 3:7-8, they suffer the effects of their disobedience:

And the eyes of them both were opened, and they knew that they were naked; and they sewed fig leaves together, and made themselves aprons. And they heard the voice of the LORD God walking in the garden in the cool of the day: and Adam and his wife hid themselves from the presence of the LORD God amongst the trees of the garden.

Other changes occurred as soon as Adam and Eve ate the forbidden fruit. Their eyes were opened "and they knew that they were naked" and then took steps to cover up their nakedness by sewing fig leaves together to fashion aprons. This, of course, brings about the question of their appearance prior to their disobedience. Were they walking around Eden naked or were they, perhaps, naked and not ashamed, as Genesis 2:25 says, because they were covered in some other way? I am not going to get into the reasons for it right now but, suffice to say, I believe that Adam and Eve were clothed with garments of light prior to their disobedience. After all, they were created in the image of God and the Bible says of God in Psalm 104:2, "Who coverest thyself with light as with a garment…". If that light vanished when they ate the forbidden fruit, that might explain why they suddenly knew that they were naked.

Another change is that Adam and Eve's fellowship with God was immediately broken. In Genesis 3:8-10 we read:

This break of fellowship is a fulfillment of God's warning in Genesis 2:17, "…for in the day that thou eatest thereof thou shalt surely die."

But wait, you may object, doesn't the Bible tell us that Adam and Eve lived many years after eating the forbidden fruit? After all, Genesis 5:3 tells us that Adam and Eve were 130 years old when their son, Seth, was born. And, in Genesis 5:5, we find that Adam lived to the ripe old age of 930. That is a far cry from "…for in the day that thou eatest thereof thou shalt surely die."

Well, the answer lies in understanding that death is fundamentally a separation. Physical death, for instance, is when the soul and spirit are separated from the body. James refers to this in James 2:26, where he writes, "For as the body without the spirit is dead, so faith without works is dead also." Remember, according to Genesis 2:7, Adam was not alive until God "breathed into his nostrils the breath of life; and man became a living soul." Consequently, when the soul and spirit leave the body, death occurs.

Physical death, however, is not the only kind of death. Spiritual death is the separation of God and man. When Adam and Eve disobeyed God it is evident that they did not experience physical death right away. They did, however, experience spiritual death. At that moment, the relationship between God and man was severed and they were now separated from their Creator. Specifically, their spirit, which once was in fellowship with God's Spirit, alive unto God, was now dead, separated from God. Consequently, instead of looking forward to and enjoying fellowship with God, we find Adam and Eve hiding fearfully from the One who created them.

Understanding spiritual death is vital to understanding why the virgin birth of Jesus Christ is necessary. As a result of Adam's disobedience, not only did Adam die spiritually that day, but all humanity did as well. In fact, the Bible says in Romans 5:12, "Wherefore, as by one man sin entered into the world, and death by sin; and so death passed upon all men, for that all have sinned". Therefore, every child born into this world, from Cain to the present, has a sin nature and must be born again.

Since God held Adam, not Eve, responsible for the entrance of sin into the world, this sin nature has evidently been passed from fathers to their children from generation to generation, all the way back to Adam. This means that Jesus Christ, if He had had an earthly father, would have inherited His earthly father's sin nature because Romans 5:12 tells us, "Wherefore, as by one man sin entered into the world, and death by sin; and so death passed upon all men, for that all have sinned". Again in, 1 Corinthians 15:21-22, we read, "For since by man came death, by man came also the resurrection of the dead. For as in Adam all die, even so in Christ shall all be made alive."

This, then, is why the virgin birth of Christ was necessary. Had Jesus had an earthly father, He would have inherited His earthly father's sin nature. And, if Jesus had been born with a sin nature, He could not have been, as Hebrews 7:26-27 says, our perfect, sinless "…high priest…who is holy, harmless, undefiled, separate from sinners; Who needeth not daily, as those high priests, to offer up sacrifice, first for his own sins, and then for the people's..."

That is why the angel Gabriel said to Mary in Luke 1:35, "…The Holy Ghost shall come upon thee, and the power of the Highest shall overshadow thee: therefore also that holy thing which shall be born of thee shall be called the Son of God." In doing so, God built upon the 23 chromosomes of Mary's human DNA by creating an additional 23, thereby completing the full 23 pairs of chromosomes, to produce a unique person of both human and Divine origin. This is particularly evident in the fact that Jesus was born male, with an XY chromosome pair, and not female, with an XX chromosome pair. The only way that Jesus could be born male was for God to specially create a Y chromosome to complete the 23rd pair since females can only supply X chromosomes.

Consequently, according to Hebrews 2:9, "…we see Jesus, who was made a little lower than the angels for the suffering of death, crowned with glory and honour; that he by the grace of God should taste death for every man." Or, as Paul explained in Philippians 2:6-8, "Who, being in the form of God, thought it not robbery to be equal with God: But made himself of no reputation, and took upon him the form of a servant, and was made in the likeness of men: And being found in fashion as a man, he humbled himself, and became obedient unto death, even the death of the cross.

This is all brought together for us in the larger context of Romans 5:12-19:

Wherefore, as by one man sin entered into the world, and death by sin; and so death passed upon all men, for that all have sinned: (For until the law sin was in the world: but sin is not imputed when there is no law. Nevertheless death reigned from Adam to Moses, even over them that had not sinned after the similitude of Adam's transgression, who is the figure of him that was to come. But not as the offence, so also is the free gift. For if through the offence of one many be dead, much more the grace of God, and the gift by grace, which is by one man, Jesus Christ, hath abounded unto many. And not as it was by one that sinned, so is the gift: for the judgment was by one to condemnation, but the free gift is of many offences unto justification. For if by one man's offence death reigned by one; much more they which receive abundance of grace and of the gift of righteousness shall reign in life by one, Jesus Christ.) Therefore as by the offence of one judgment came upon all men to condemnation; even so by the righteousness of one the free gift came upon all men unto justification of life. For as by one man's disobedience many were made sinners, so by the obedience of one shall many be made righteous.

Consequently, we can see from the Bible that the virgin birth of Jesus Christ was not just necessary, it is vital. Without it, there would be no Saviour. And if there were no Saviour, then there would be no hope. But, "Thanks be unto God for his unspeakable gift" (2 Corinthians 9:15), in that "…God commendeth his love toward us, in that, while we were yet sinners, Christ died for us" (Romans 5:8), "For he hath made him to be sin for us, who knew no sin; that we might be made the righteousness of God in him" (2 Corinthians 5:21).

Or, as John put it in 1 John 4:9-10, "In this was manifested the love of God toward us, because that God sent his only begotten Son into the world, that we might live through him. Herein is love, not that we loved God, but that he loved us, and sent his Son to be the propitiation for our sins."