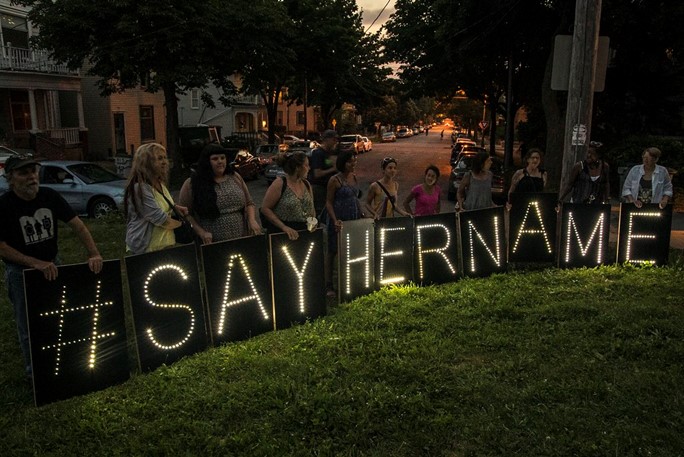 Newman quotes BLM Los Angeles founder and California State University Professor of African Studies Melina Abdulla who said, "Maybe I'm sharing too much, but we've become very intimate with the spirits that we call on regularly, right...Like, each of them seems to have a different presence and personality, you know. I laugh a lot with Wakisha [a spirit Abdulla communes with], you know. And I didn't meet her in her body, right, I met her through this work."

BLM co-founder Patrice Cullors is also quoted. She describes the "say his name" mantra having deep spiritual significance, "When we say the names, right, so we speak their names, we say her name, say their names, we do that all the time that, you kind of invoke that spirit, and then those spirits actually become present with you..."

Cullors continued, "Spirituality is at the center of Black Lives Matter, and I think that's not just for us, I feel like so many, um, leaders and so many organizers, um, are deeply engaged and in a pretty, um, important spiritual practice. I don't think I could I could do this work without that. I don't think I could do it as long as I've done it, and as consistently. Um, it feels like if I didn't do that it would be antithetical to this work."

Now, it was bad enough when Cullors stated during a 2015 interview, ""We actually do have an ideological frame... we are trained Marxists." Now we know that BLM leaders and organizers are into necromancy, witchcraft, and the occult. No wonder a September 14 video showed a BLM mob in Charlotte, North Carolina, shouting "F*** your Jesus!" attacked a black street preacher who was declaring, "Jesus saves" and testifying, "The Blood of Jesus."

Two of our radio programs delve into this troubling issue. You can listen to both of them online:

Unfortunately, many professing Christians who support, endorse, and join in with BLM. However, BLM's occultic practices did not cease to be abominations to God just because Christians, pastors, and churches are being sucked into this ungodly, satanic movement under the guise of compassion, justice, love, etc.

"When thou art come into the land which the LORD thy God giveth thee, thou shalt not learn to do after the abominations of those nations. There shall not be found among you any one that maketh his son or his daughter to pass through the fire, or that useth divination, or an observer of times, or an enchanter, or a witch, Or a charmer, or a consulter with familiar spirits, or a wizard, or a necromancer. For all that do these things are an abomination unto the LORD: and because of these abominations the LORD thy God doth drive them out from before thee."

So, for all those who STILL support Black Lives Matter, it is time for you to repent and turn back to the God of the Bible!